"Patriots, The Men Who Started the Revolution" written by A.J. Langguth. 563 Pages. 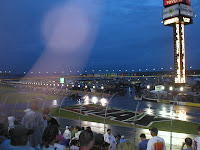 I think I am now becoming a redneck. I assume it's the natural progression after becoming a Citizen and living in the South?

A couple of weeks ago we went to see George Strait in concert in Raleigh. A great concert by a great artist. Then Memorial Day weekend I went to my first NASCAR race, the Coca Cola 600 at 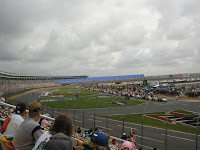 Lowes Motor Speedway near Charlotte, NC. It was fun and despite the first day being completely rained out and the the race only eventually going 227 of the 400 laps I think it is something I would do again. Part of the the fun is chosing a driver. In my ignorance I chose Tony Stewart. Not for any particular reason except I heard an interview with him on a radio and I was impressed how the
"bad boy" became a team owner.

On top of this we are now back in Texas for a vacation and my love for Texas is still as strong as ever.

So, from North-East Englishman to a Southern US Redkneck???

"Only When I Laugh" written by Len Deighton. 241 Pages.

-Richard
Posted by Richard at 10:32 am No comments: