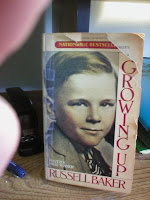 "Growing Up" written by Russell Baker.

It is the Pulitzer Prize winning autobiography written set during the depression by Russell Baker a New York Times columnist. An easy, and enjoyable read.

-Richard
Posted by Richard at 12:15 pm No comments:

So, the Vice-President choices had been made!!

For the Democrats I was a bit disappointed in the choice Joe Biden for Obama. I understand why. The experience, especially foreign affairs, which a perceived weakness versus McCain. However, Biden has been a Senator for a long time and is part of the Washington fabric so can't really be considered a "change" candidate per se. However, it is a safe choice.

For the Republicans I am confused. Sarah Palin (who?). I have read that this is a brilliant move or a dissaster. It could be good because it give a fresh face outsider and a woman to counter act Obama's change message and try and pick up dissilusioned Hilary supporters. It is a disaster because McCain has given Obama the advantage on one if his best points - experience. Palin has been a Governer for only a couple of years and before that a small town Mayor. I don't see how she could be President if anything happens to McCain. McCain could have gone for a better choice to gain the two edges he was trying to get.

I think a slight advantage to Obama over these picks.

What about Obama's convention speach. I thought it was a "good-ole" political speach. Atacking his opponant, but, with respect aswell as outlining his vision with passion. The last half of it at least sounded like an Evangelical preacher preaching on the Sermon on the Mount. An interesting juxtopostion in this election as the far more Evangelical, Born Again Christian candidate is the Democrat. I am looking forward to what the Republican convention is going to do and especially how McCain and Palin both do.

It's going to be a fun few weeks. 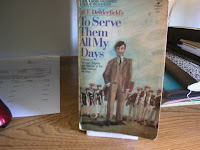 "To Serve Them All My Days" written by R.F. Delderfield.

I chose this book because I really enjoyed the TV dramitisation when I was a kid. I thoroughly enjoyed the book. A pilgrimage of a shell-shocked World War I veteran starting his new life as a Master in a Private English school through various successes, bad times and challenges competing the circle as World War II breaks out in Europe.

-Richard
Posted by Richard at 3:55 pm No comments:

So, the Olympics are over. What am I going to do with myself now? For the last two and bit weeks it has been work, sleep (not as much as I need), Olympics, work, etc... It's been fun and as always is one of my favourite events.

It was also fun rooting for a successful team (for once) with Britain winning 19 Golds and 47 total medals. These are numbers I thought I would never see. The best since 1908 by a long way. I enjoyed watching my new country succeed. The amazing Michael Phelps and Usain Bolt. Great days. I learnt that Britain produces damn good cyclists!!

Roll on 2012 back in my home country. I am already planning on going home for them. Not, necessarily to go events, although that would be part of it, but, just to be there for the atmosphere..

-Richard
Posted by Richard at 5:44 pm No comments: 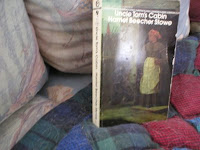 -Richard
Posted by Richard at 12:08 pm No comments:

I finished reading the Bible Book of Ezra.

-Richard
Posted by Richard at 3:32 pm No comments:

Top of the World

Sitting on top of the world
Or so it feels
Looking down on valleys and trees
And houses e'er so small
People like ants
Milling around.
The only noise a rustling breeze
Or distant drone of aeroplanes.

I feel how God must feel
Looking down on His world
Thinking what beauty surrounds
Until a derelict mill
And man made quarry
Jut into sight:
The proverbial "blot on the landscape."

I could sit here all day
Away from the city and smog
Until in the distance
I spy the expanse
Of Manchester smoking away.

Oh well! I can only dream
About sitting on top of the world.

-Richard
Posted by Richard at 11:26 am No comments: 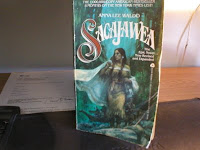 I guess I would call this book interesting. I am not a big fan of historical fiction where "real" peoples stories are made up.

-Richard
Posted by Richard at 4:18 pm No comments:

Yesterday was a day of mixed emotions....

The first is the good. The San Jose Earthquakes vanquishing the hated and evil Los Angeles Galaxy 3-2.

The second is the sad. One of my heroes, Alexander Solzhenitsyn died yesterday. He was an incredible 89 years considering what he had to go through in his life.

-Richard
Posted by Richard at 10:01 am No comments:

I am a big fan of 30 Days, the Morgan Spurlock Documentary Series on the FX Network. It is were people are put into an "opposite" situation for 30 days to see how they get on, try and understand the other view etc... I find it one of the more thought provoking shows on TV.

We just watched episode 3 of the latest series were a North Carolina Hunter had to spend 30 Days with a PETA actavist in Los Angeles. Very interesting. I think it's difficult to put in to words exactly what I think. I am against PETA's methods, however, agree with many of their causes. I think a summary of my position is no animal should suffer cruelty. I am not a vegitarian or vegan, but, do not understand why the animals have to suffer in providing us with food. I always used to try and buy products that were free range but have slipped badly. This show as now re-inforced how I need to do this, or if I can't find it in a particular store then not to buy and do without.

The other issue this brought back to the forefront of my mind is what I do for a living. Although, the company I work for in no way does any animal activities some of our clients do, be it Pharma, cosmetics and big farming. I guess it's something that I put to the back of my mind. I guess now it's time to re-think about it.....

I finished reading the Bible Book of 2nd Chronicles.

-Richard
Posted by Richard at 11:12 am No comments: