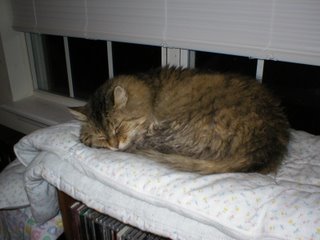 The next foster cat we had was Baby Boy. He was a guy that really impacted our lives and confirmed the calling we had in this work.

He first came into lives in March 2003. He was unhappy in his current foster home. We thought he was about 8 years old. He was adopted out in October 2003. Unfortunatley he was returned in March 2004 because he was not very well and the person who adopted him could not afford the cost. After he came back he was not himself so we took him to Snowflake's "specialist" vet, Cornwallis Road, in Durham. It was determined that he was a lot older than we thought, about 17 years old. One of the problems with animal rescue is that it is not very often we know the exact age of the cats we rescue. It was also determined that he had bad gingivits, which it then became apparant that we it was due to renal failure. 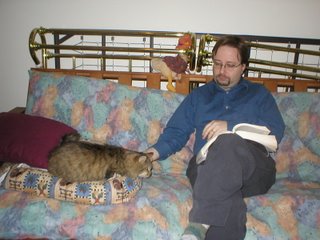 As he was happy and in no pain we took the decision to treat him. He lived many happy months with a lot of loving care from Jenn. He finally came to point where after a tough life he realised he was loved and that it was time to say goodbye, so with him failing, we made the hard, but correct decision to put him asleep. The date: July 20th 2006 will always be on our minds. He taught us so much. How animals can give back, can inspire, can fight and above all love back. He is why we do so much and are driven to give back and give so many other cats the chance he finally got and give them a chance to get the special love and attention for a live time rather than the finally couple of years.